Douglas Adams mentions the myth about the Trans-Siberian railway in his essay “The little computer that Could” as one of his favourite pieces of information;

“… there is a large kink in the Trans-Siberian Railway because when the tsar (I don’t know which tsar it was because I am not in my study at home, I’m leaning against something shamefully ugly in Michigan and there are no books) decreed that the Trans-Siberian railway should be built, he drew a line on a map with a ruler. The ruler had a nick in it.” (Douglas Adams, The salmon of Doubt, 2002)

Fascinating anecdote. I spent some time on Google maps looking for this straight line with a nick. Without success. So when I met with a Russian friend the other day, I related the anecdote to him and to my surprise he knew about it. The version he knew did not include a nick in the ruler, but the tsar’s finger. Curious himself, a few days later he came back with this link to Веребьинский обход и палец императора (yes, in Russian) relating the urban myth. Yes, it is a myth, A beautiful myth, but not true. Let me give you a short overview of the article.

This is Emperor Nicholas I of Russia (1825-1855). The myth is that he, furious about delays in the design of the railway, took a ruler and drew a straight line from St. Petersburg to Moscow, commanding: “Build like this!” By accident the Emperor’s finger was outside the ruler and this created a small arc on the map. Since no one dared to go against the Emperor’s will, they built a railroad with a bizarre bend in the middle.

What really happened was that building railways in a straight line simply was common in those years. The world’s first railroad from Stockton to Darlington (S&DR) was straight it was soon realised maybe not always a practical and following lines in the UK took a more pragmatic approach. In Russia, even if construction started a good twenty years later, this insight had not yet arrived or emerged.

But there was a difficult section; the so-called Verebyinsky Uplift. This a tiny section (only 2.5% of the total length of the line) included not only two long bridges (crossing the rivers Verebyya and Msta), but also had a slope of 8.2% due to a height difference of more than 120 meters. The locomotives were not powerful enough to overcome this ascent and trains going to Moscow had to be disconnected and dragged up, one by one. This tiny section took two hours to cross.

Going down was even worse. Trains coming form St. Petersburg would simply burn through the brake pads and could not stop, riding off the tracks at the station Verebye. The first disaster causing human casualties occurred on February 12, 1852, just three months after the road was taken into operation.

They tried various things, for example to ban trains on this section at night, or to avoid having two oncoming trains passing on this part of the track. But on October 27 1869 a fire destroyed three spans of the wooden Mstín bridge and the railway connection between St. Petersburg and Moscow was interrupted for four months. More drastic measures were needed.

Decided was to replace all wooden bridges by metal ones. When preparing the bridge for the Verebyinsky Uplift, the engineers realised that if the train would cross the river Verebyya a few miles north they could avoid an expensive metal bridge and instead fill a ravine (still 49 meters to cover) leaving a small opening with a diameter of 6 meters for the river to pass through. Yes, the length of the tracks would increase by 6 miles, but most importantly, the slope decreased to a quite acceptable 5.8%.

In 1881 all works were completed and trains started to appear on the new track. What also appeared was the urban legend about the finger of the Emperor even if by that time the Emperor Nicholas I had passed away a quarter of a century earlier.

Nowadays, with much more powerful trains and with the intention to upgrade the Moscow-St. Petersburg into a high-speed connection, the emery’s finger has been removed and the track has been restored to its ‘original’ straight line.

Source for this post is this live journal , in Russian and I must thank my friend in helping with the translation. As he explained, in Russian negations re quite different and strange, and the running joke is that questions on voting ballots are in the form: Aren’t you against Putin? Please choose one of the following answers; Yes, I am not against Putin and No, I am not against Putin. Apparently, in russian they both mean exactly the same. 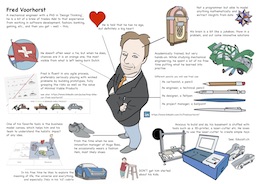